Haven’t decided which of these I will feature. Mind you, not knowing anything about Dave and Ansell Collins, that will probably get a miss. Checking on my books I found this Jamaican duo of Dave and Ansil Collins had come from nowhere in the northern spring of 1971 to hit with only the second West Indian reggae number to top the British charts after Desmond Dekker's "Israelites" from April 1969. The Guiness Book of British No 1 Hits suggested the early success of reggae in the UK was partly due to the genre’s appeal to skinheads. Double Barrel also made it to the US Top 30 becoming one of the first reggae songs on the US charts.

Paul Napier has put together a follow-up to an earlier radio documentary on New Zealand at War. This one focuses on the Pacific
Playing on Coast at 10am and repeated at 6pm Saturday 25 April 2009 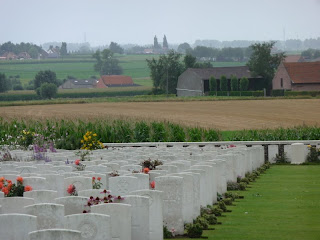 The countryside surrounding Tyne Cot Cemetery, so tranquil now. During the Dawn Service in Auckland, I was thinking I had, as an Airforce Photographer, served overseas when I attended the 25th Anniversary of the Battle of Tarawa in 1968. See also my Blog on Menin Gate
Posted by Unforgettable Music at 11:26 PM No comments:

UK#1(5) from 15 April 1972 and NZ#1. An instrumental hit version that at the time of their success this band was in West Germany and so were unaware that a track from their album was gaining tremendous radio listener reaction, beginning on BBC Radio Two. Public demand forced RCA to release the tune as a single and within three weeks it had climbed to the top of the UK charts.

UK#6, 14 weeks in Top 20 from 19 April and US#40, 5 weeks in the Top 100 from 27 May, 1957. This version was written in 1957 but the original song version is attributed to Elizabeth Cotten (U.S.A,), who worked as a domestic for much of her life, and originated the unique guitar style known as 'Cotton Picking'. Song first introduced into Britain by Peggy Seeger. HUGE HIT in N.Z.

Tease for 3pm
The B-side to this artist’s seventh million seller was his eleventh, which suggests a slow build. This B-side charted one week after the A-side, (when it made US#1) and was a cover of an Inkspots 1941 recording. US#58, 7 weeks in Top 100 from 13 April 1957.

Tease for 5pm
US#6, 16 weeks in the USA bestsellers from 14 April 1958. The only million-seller by this husband and wife duo. They became a singing team in nightclubs, hotels, on TV and records, had their own radio show on CBS for two years and on ABC for two years. HUGE HIT in N.Z.

And the songs;
3pm, Elvis Presley – That’s When The Heartaches Begin
5pm, Art & Dotty Toddy – Chanson D’Amour
Posted by Unforgettable Music at 1:07 AM No comments:

Tease for 3pm
US#1(2) from 12 April 1975. Tribute to tennis star Billie Jean King and her team, the Philadelphia Freedoms, in response to a gift of a personalised track suit she had surprised the singer with at a tennis tournament.

Tease for 5pm
US#2(3) from 12 April 1969, UK#35 in April and a Monster Hit in N.Z. ( Taken from the group’s self titled album by popular demand, it spent 13 weeks in US Top 100 from 1 March and sold a million by 12 June 1969. From a pop jazz group formed in New York in the (northern) summer of 1967, one of the most mature groups formed in some years. The group got to 9 members with a significant brass sound, with trumpet and trombone, along with sax and the usual guitar and drums.

And the songs;
3pm, Elton John – Philadelphia Freedom
5pm, Blood, Sweat and Tears – You've Made Me So Very Happy
Posted by Unforgettable Music at 2:34 PM No comments:

Since Saturday 28 March 2009 I ceased my regular Coast shift from being sacrificed to the shareholders wishes for cost cutting. Part of my redundancy notice included the paragraphs;
“This proposal is to discontinue the night show on Coast and to voice track the Afternoon Drive day part.
As part of this proposal we would utilize the *existing night announcer, at no additional cost, to voice track the Afternoon Drive Show on Coast as part of his standard day to day work requirement. This is better utlilisation of our current resources and offers a significant cost benefit to the company.”

Then I read about Justin Brown and how he had been laid off from the Classic Hits Breakfast Show and determined to remain positive, he set up a website highlighting firms who have so far managed to keep their staff.

Being laid off sure makes one feel valued (not), however I was offered regular part time work doing the Saturday afternoon shifts on Coast and the occasional covering shift for when one of the regular announcers is away on leave. So my first such covering shift was the Thursday before Easter and doing the 3 to 8pm slot for Rick*, I played as my ‘Ray’s Song Pick Of The Day’
Gilbert O’Sullivan
Get Down, UK#1(2) from 7 April 1973, A plea for to his dog to get down off the furniture. The artist’s second consecutive and final UK number one represented the peak of his popularity. (He did make #1 in the US with “Alone Again, Naturally”). Only one more UK Top 10 hit was to follow and two years later the hits stopped. O’Sullivan’s first No. 1 was Clair, about babysitting the daughter of his manager, Gordon Mills. Later there was bitter court battle with his producer and manager Mills, over earnings from his recordings, which was widely reported early in 1982. The court decided in favour of O’Sullivan who had not received a just proportion of the income his songs earned.


Tease for 1pm 11 April
The second Merseybeat group to be signed by Brian Epstein but, they were the first of his acts to make No 1. This was a song that producer George Martin had in mind for John, George, Paul and Ringo but they had wanted to do one of their own compositions, "Please Please Me", so the Mitch Murray composition went to this group and it became a UK#1(3) from 11 April, Au#1(1) 5 July 1963 and a Monster Hit in NZ

Tease for 2pm
The 3rd million-seller for this artist was US#13, 12 weeks in Top 100 from 11 April 1964, and the title was used for another of his albums, which became a million-seller. MODERATE HIT in N.Z.

Tease for 3pm
Adapted from a traditional air (Will You Be Mine) for the film 'Battle Cry' by Paul Francis Webster and Max Steiner. US#6, 17 weeks in Top 100 from 23 April 1955 and the 4th million-seller for this artist and a Big Hit in N.Z.

Tease for 4pm
US#6 in 1956, 20 weeks in the Top 100 from 28 April and UK#8, 9 weeks in Top 30 from May 1956. A million seller globally and written by this artist who was Beijing, China born late 1922, his father then Head of Department, Medicine at Peking Union Medical College. When he was four, the family moved to Chicago and that is when his mother began teaching him piano.
Composing since age seven, in the early 1950s he decided to make songwriting his career. With more than 30 of his songs figuring in the careers of Eddy Arnold, Hank Locklin, Carl Smith, Faron Young, Kitty Wells, Jerry Wallace, Nancy Wilson, The Chordettes and others. He wrote 12 songs for Elvis, 5 of which were included in Elvis’ films

Tease for 5pm
Written by Robert Allen (music) and lyrics by Al Stillman, for the 1957 movie 'Lizzie' in which our artist sang the title song and his recording was the biggest hit version of the song. Martin Scorsese used this song in his 1990 film 'Goodfellas'. US#5 in 1957, 34 weeks in Top 100 from 29 April and a HUGE HIT in N.Z.

1pm, Gerry & The Pacemakers – How Do You Do It?
2pm, Al Hirt – Cotton Candy
3pm, Art Mooney – Honey-Babe
4pm, Don Robertson – The Happy Whistler
5pm, Johnny Mathis – It’s Not For Me To Say
Posted by Unforgettable Music at 2:43 AM No comments: