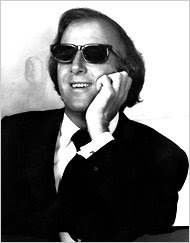 George Shearing, the British piano virtuoso who overcame blindness to become a worldwide jazz star, and whose composition “Lullaby of Birdland” became an enduring jazz standard, died on Monday 14 February 2011 in Manhattan. He was 91.

The cause was congestive heart failure, said his manager, Dale Sheets. Mr. Shearing had homes in Manhattan and Lee, Mass.

In 1949, just two years after Mr. Shearing immigrated to the United States, his recording of “September in the Rain” became an international hit. Its success established him as a hot property on the jazz nightclub and concert circuit. It established something else as well: the signature sound of the George Shearing Quintet, which was not quite like anything listeners had heard before — or have heard since.

“When the quintet came out on 1949, it was a very placid and peaceful sound, coming on the end of a very frantic and frenetic era known as bebop,” Mr. Shearing said in a 1995 interview on the Web site newyorkcritic.org. What he was aiming for, he said, was “a full block sound, which, if it was scored for saxophones, would sound like the Glenn Miller sound. And coming at the end of the frenetic bebop era, the timing seemed to be right.”

The Shearing sound — which had the harmonic complexity of bebop but eschewed bebop’s ferocious energy — was built on the unusual instrumentation of vibraphone, guitar, piano, bass and drums. To get the “full block sound” he wanted, he had the vibraphone double what his right hand played and the guitar double the left. That sound came to represent the essence of sophisticated hip for countless listeners worldwide who preferred their jazz on the gentle side.

The personnel of the Shearing quintet changed many times over the years, but except for the addition of a percussionist in 1953 — the band continued to be called a quintet even after it became a sextet — the instrumentation and the sound remained the same for almost three decades.

When Mr. Shearing disbanded the group in 1978, it was less because listeners had grown tired of that instrumentation and sound (although the group’s popularity, like that of mainstream jazz in general, had declined considerably) than because Mr. Shearing himself had.

“I had an identity. I held on to it for 29 years. Eventually I held on like grim death,” he told John S. Wilson of The New York Times in 1986. “The last five years I played on automatic pilot. I could do the whole show in my sleep.”

Shortly after breaking up the group, Mr. Shearing said, “There won’t be another quintet unless Standard Oil or Frank Sinatra want it.” Standard Oil never asked, but in 1981 Mr. Shearing reassembled the quintet for a Boston engagement and a series of Carnegie Hall concerts as Mr. Sinatra’s opening act. He returned to the quintet format on occasion after that, but it was never again his primary focus.

His preferred format became the piano-bass duo, originally with Brian Torff and later with Don Thompson and Neil Swainson. He also performed with bass and drums and, on occasion, unaccompanied. In the 1980s and ’90s he had great success in concert and on record with the singer Mel Tormé. 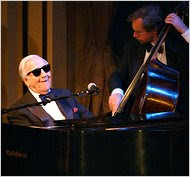 [George Shearing at “Remembering Mel,” a tribute to his collaborator Mel Tormé, at Feinstein’s at the Regency in 2002. ]


By his own estimate Mr. Shearing wrote about 300 tunes, of which he liked to joke that roughly 295 were completely unknown.

He nevertheless contributed at least one bona fide standard to the jazz repertory: “Lullaby of Birdland,” written in 1952 and adopted as the theme song of the world-famous New York nightclub where he frequently performed. Both as an instrumental and with words by George David Weiss, it has been recorded by everyone from Ella Fitzgerald to Bill Haley and His Comets, who improbably cut a version called “Lullaby of Birdland Twist” in 1962.

George Albert Shearing was born on Aug. 13, 1919, in the Battersea area of London, the youngest of nine children. His father, James Phillip Shearing, was a coal worker; his mother, the former Ellen Amelia Brightner, took care of the family during the day and cleaned trains at night.

In his autobiography, “Lullaby of Birdland” (2004), written with Alyn Shipton, Mr. Shearing recalled that his first attempts at making music involved throwing bottles from an upstairs window: milk bottles for a classical sound, beer for jazz. More conventionally, he began picking out tunes on the family piano at 3, even though it had some broken keys.

He was discouraged from pursuing his interest in the classics, he later recalled, by a teacher who recognized his gifts as an improviser and felt that studying classical music would be a waste of time. He nonetheless came to see the value of classical training; he later returned to the classics and eventually performed Bach and Mozart on several occasions with symphony orchestras.

Mr. Shearing began his career at 16, when another blind pianist gave up his job playing in a London pub and recommended Mr. Shearing as his replacement. He eventually had his own 15-minute show on the BBC and was voted Britain’s best jazz pianist seven consecutive years in the poll conducted by the magazine Melody Maker. He was indisputably a star at home; the next stop, clearly, was the United States.

Glenn Miller and Fats Waller, among others, encouraged Mr. Shearing to try his luck in the United States after World War II ended. But the booking agents were not especially impressed. At home he had sometimes been billed as “England’s Art Tatum” or “England’s Teddy Wilson.” But, he told The Times in 1986, when he performed for one American agent he received a curt response: “What else can you do?” It was not enough, he realized, to sound like other pianists. He needed to develop a sound of his own.

Mr. Shearing found it with the help of a fellow Englishman, the jazz critic and pianist Leonard Feather, who like him had moved to the United States, and who suggested what became his signature instrumentation. With Margie Hyams on vibraphone, Chuck Wayne on guitar, John Levy on bass and Denzil Best on drums, Mr. Shearing recorded “September in the Rain” in 1949. The distinctive sound of both the quintet and Mr. Shearing himself — he used a so-called locked-hands style in which his hands played melody and harmony in close quarters, with the melody line harmonized by the right hand and doubled by the left hand an octave below — caught listeners’ fancy, and stardom soon followed.

In the early years of Mr. Shearing’s renown he recorded for the MGM label, but his longest professional relationship was with Capitol, where he was a mainstay of the roster from 1955 to 1969. In addition to recording him with his quintet, Capitol teamed him with a number of singers, including Peggy Lee, Nancy Wilson and even Nat (King) Cole, an accomplished jazz pianist in his own right, who relinquished the piano chair to Mr. Shearing on a memorable 1961 album.

With the market for jazz shrinking in the late 1960s, Capitol chose not to re-sign Mr. Shearing. He then formed his own small record company, Sheba, but that enterprise was short-lived. In 1979, a year after disbanding his quintet, he signed with Concord, a jazz label, and his career soon underwent a resurgence.

It was under Concord’s aegis that he first recorded with Mel Tormé. Their albums “An Evening With George Shearing and Mel Tormé” and “Top Drawer” won Grammys — for Mr. Tormé but not for Mr. Shearing, who despite his many other accomplishments never won one.

In his later years, Mr. Shearing also recorded unaccompanied; in duet with his fellow pianists Marian McPartland and Hank Jones; and in settings as uncharacteristic as a Dixieland band. He continued performing into his 80s and stopped only after a fall in 2004, which led to a long hospital stay.

Mr. Shearing’s marriage to Beatrice Bayes ended in divorce. He is survived by his wife, the former Ellie Geffert, and a daughter, Wendy.

Mr. Shearing was invited to perform at the White House by three presidents: Gerald R. Ford, Jimmy Carter and Ronald Reagan. He performed for the British royal family as well. The British Academy of Composers and Songwriters gave him the Ivor Novello Award for lifetime achievement in 1993. In 1996 he was invested as an officer in the Order of the British Empire, and 11 years later he was knighted.

“I don’t know why I’m getting this honor,” he said shortly after learning of his knighthood. “I’ve just been doing what I love to do.”
Posted by Unforgettable Music at 11:14 AM No comments: