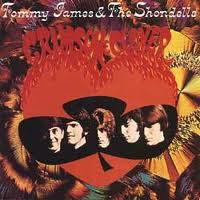 Thursday 6th Oct Bill Ashworth popped up on Facebook chat ...
Hey Ray, next time you are on Coast can you find the exact album your version of Crimson and Clover by Tommy James and the Sondells is from? I bought one off i-tunes but I like the version that Coast plays

Hi Bill, the version Coast play is the long version, presumably the album version. Coast have the song on a computer hard drive, so not sure if I can check on the source. Will check one of my music books.

Bill came back with ...
Hello Ray, Thanks for the clues, the version I have is from their album Crystal Symphonies The Psychedelic Years, is extended play 5:31 but is modified from the Coasts version which I prefer.

Pat Downey's book says that a 5:30 version was on Rhino 70534 Crimson & Clover/Cellophone Symphony. (LP version with :07 of studio talk) Pat Downey also notes there was available (a noble attempt at recreating the 45 version but unfortunately this is not the real 45 version) for example on Rhino 70630 Billboard's Top Rock & Roll Hits of 1969.

Bet you didn't realise things can be so complicated when you're trying to obtain an 'original' version of a song.
Posted by Unforgettable Music at 1:41 PM No comments: