Best remembered more for his idle boasts than his music


Music collector maestro Scott Hughes emailed to ask if I heard that "Crispian St Peters has gone now. He seemed to have more hits in NZ than anywhere else with Pied Piper, You Were On My Mind, Changes, Your Ever Changing MInd and my personal favourite, No No No. Not a surprise I guess, as been sick for years but losing a lot of singers from that era."

From Wikipedia I condensed down his bio to
Born Robin Peter Smith (b. 5 April 1939 d. 8 June 2010) a British pop singer best known for his 1966 hit, "The Pied Piper". As a young man, St. Peters performed in several relatively unknown bands in England. In 1956, he gave his first live performance, as a member of The Hard Travellers.
Under manager David Nicolson's tutelage the shy star was momentarily transformed into arrogance incarnate and is perhaps best remembered more for his idle boasts than his music.

I don't recall any of the controversy over his comments and claims, maybe that just didn't seem so important down under, in N.Z. In asking music maestro Mark if he remembered any of these extravagant claims he said, "No have never heard that before. Usually it's P.J. Proby that has the big ego."

In looking in Google Images for a suitable pic I came across this website dedicated to the man and his music
Posted by Unforgettable Music at 2:40 AM No comments:


I was asking Don Stuart at our regular 'Saturday Music Lunch' about him getting his Lonnie Donegan memories he told us about, onto the computer, so I could post here. Well, Don has supplied three jpegs of his efforts in getting his memories recorded, so until I find an OCR programme that I can relate to, here are those images, those memories - with the first jpeg now typed out ...


I was 17 at the time when I went to the St Andrew's hall in Glasgow to see Chris Barber and his Jazz band. They were, in my opinion, the best jazz band in Britain and at the interval Chris Barber then introduced Lonnie Donegan and his Skiffle group. Barber forsook his trombone for the bass and with Beryl Brydon on washboard, and Donegan and Dick Bishop on guitar they played a style of music that completely blew me away. Skiffle music went on to become very popular and Lonnie Donegan was the man who inspired the Beatles, Elton John and lots of other Big stars in Britain!

My pal Sammy McDougall and I decided to buy ourselves guitars, and it wasn't very long until we were strumming and singing all Donegan's hit records as they were released! One night my young brother Norman found himself a wash board and thimbles and we began to sound like a skiffle group. My dad came home from work one night with a huge balalaika looking double bass he had made. It had real strings on it, and was painted black and white! It looked and sounded real good. Another pal of ours, Eddie Brady, began to play it. We then met Vicky Casware, a good singer and Bango player and our group was complete. We were on our way! We began to practice in my house 3 and 4 days a week and I still don't know how my Mum and Dad put up with the noise. However at a party one night someone taped us and when I heard the playback I was amazed at how good we sounded! 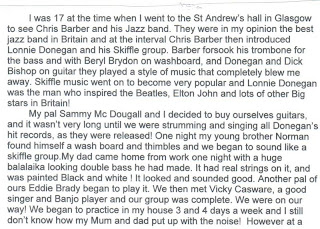 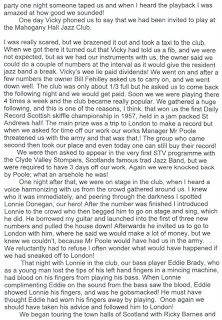 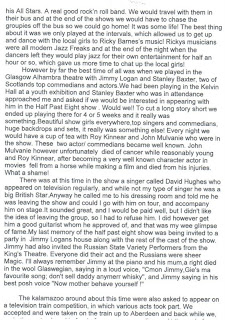 
This story brought to mind a... couple of Woody Herman numbers and of a request from a man to play Golden Wedding for his 11 year old grandson - who was into his drumming. Granddad wanted to expose the lad to some great drumming from an earlier time.
Check out also, Woody Herman in his later years performing Woodchopper's Ball
Posted by Unforgettable Music at 1:19 PM No comments: