To think, in the week following playing The Rascals - People Got To Be Free, with references to Bobby Kennedy, his brother Ted Kennedy sucumbs to cancer. Tried to play the Tom Clay song, What The World Needs Now but, my software in Taupo didn't seem to want to play the 6:17 song. Messy, spoiling my best attempts.

Mr. Lee Grant
Thanks To You, NZ#1(3) from 24 August 1967 - Monster Hit
Mr Lee Grant was born Bogdan Charis Kominowski to Polish parents on April 22 1945, in a Nazi concentration camp just outside Dusseldorf. His father was killed, but he and his mother survived and emigrated to New Zealand in 1949, settling in Palmerston North.
His first interest in music came when he joined a local band called the Cyclones. He was happy to play with them at weekends but then a friend knew a DJ, and he soon had him doing dance gigs in the Hawkes Bay area. The DJ decided that Bogdan Kominowski was a bit of a handful, so he came up with a new name, Lee Grant. The Mr was added to avoid confusion with an Auckland actress Miss Lee Grant.

Mr Lee Grant's first recording was "Doo-Doodle-Do-Doo"/"As Long As I Have You" and to promote the re-release on Zodiac, he travelled to Auckland for an appearance on "Teen Scene". It was while doing that show, he met reporter, Dianne Cadwallader. She decided to become his manager and groomed the 21 year old as a presentable soloist. Dianne secured guest spots at "Teenarama" in Wellington and a recording contract with HMV. She had him dressed by a Wellington fashion mogul and he quickly became New Zealand's Mr Mod and his career was on a fashionable roll.


Jane Morgan with the Troubadours
FASCINATION Kapp [USA], This million-seller for Jane by 1958 (three million by 1965) is an oldie 'Valse Tzigane' of 1904 by F. D. Marchetti, with words (1954) by Dick Manning. It was featured in the film Love in the Afternoon (1957) starring Gary Cooper and Audrey Hepburn. Educated at the Juilliard School or Music (as lyric soprano) in New York, Jane Morgan sang at clubs to pay for her tuition. Offered a contract by French impresario Bernard Hilda, she became a hit in Paris in a few weeks. Her reputation spread throughout the Continent and Jane starred in Rome, Madrid, Brussels, Geneva and on the French Riviera, becoming a prolific linguist, Then America wanted her to star in the top clubs, and billed her as 'The American Girl from Paris'. She also appeared in many summer stock shows in the USA and in dramatic roles. She is one of the most sought-after night-club entertainers, The French words of 'Fascination' were written by Maurice de Ferandy in 1942. US#7, with 29 weeks in Top 100 from 26 August 1957 and NZ#1 in December 1957. HUGE HIT


Kathy Kirby
Dance On - Written by three members of the group The Avons (who had success with their British cover of "Seven Little Girls Sittin' In The Back Seat") The instrumental version by the Shadows was UK#1(1) 24 January 1963. Kathy's vocal version made UK#11 from 31 August, Au#1(2) from 1 November 1963 and was a Big Hit in NZ. Kathy Kirby today

Tommy Roe
SHEILA. US#1(2) from 1 September 1962, 14 weeks in Top 100 and a HUGE HIT in N.Z. Tommy Roe's own group from his teenage years, recorded "Sheila" for the Judd label in 1960 but the song didn't have any impact until after Roe signed to ABC Paramount.
Posted by Unforgettable Music at 2:57 AM No comments:

Too tired to create a tease, lets just post the info I've dragged out of my Million Sellers file ... 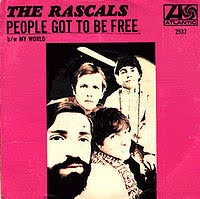 The Rascals (originally known as The Young Rascals)
People Got To Be Free, US#1(5) from 17 August 1968, 14 weeks in Top 100 from 20 July - Big Hit in N.Z.
Another big hit for the songwriters Felix Cavaliere and Eddie Brigati of the group and the fastest seller for them at that stage, reaching #1 in a month of release. According to songfacts.com, this was written in reaction to the murder of Martin Luther King, Jr. The song obtained a double meaning when Robert F. Kennedy was assassinated before the single was released.

*Debbie Reynolds (in Coast system but not played much these days)
TAMMY (with Universal International orchestra conducted by Joseph Gershenson) US#1(5) from 19 August 1957, with 31 weeks in Top 100 from 22 July, and UK#2 with 17 weeks in the British bestsellers. NZ#1 in September 1957. HUGE HIT in N.Z.
This is actually Debbie's second million-seller, her first being a duet with Carleton Carpenter in 1951. The song is by Jay Livingston and Ray Evans from the film Tammy and the Bachelor, starring Debbie, in which she sang it and the record is from the soundtrack of the film.


Chuck Berry
MAYBELLENE, US#5, 11 weeks in Top 100 from 20 August 1955 his 1st million-seller and 1st chart, also R&B#1(11). San Jose, California born, January 1931, Charles Edward Berry became as popular as Bill Haley and Little Richard, sharing the bill with them on tours and signing with Chess and making this his first big hit. Not Released In NZ.

Billy J. Kramer (In Coast system)
BAD TO ME UK#1(2) from 22 August 1963. The first act other than the Beatles to have a UK#1 with a Lennon and McCartney composition. Born William Howard Aston, August 1943 in Liverpool had been a guitarist with a number of bands while still working for British Rail. He was discovered by the Beatles manager Brian Epstein while singing with the Coasters and he became Billy J. Kramer (the middle initial standing for nothing at all and suggested by John Lennon) and Epstein replaced the Coasters with The Dakotas. Kramer's first single was a cover of the Beatles "Do You Want To Know A Secret" Monster Hit in N.Z.

Johnny Cash
A BOY NAMED SUE, US#2(3) from 23 August 1969 - Monster Hit in N.Z.
Written by Shel Silverstein and performed at San Quentin
Johnny Cash was at the height of his popularity when he recorded this song live at San Quentin State Prison in California. The concert was recorded for broadcast by Granada Television on February 24, 1969 and for the Johnny Cash At San Quentin album. The song became Cash's biggest hit on the Billboard Hot 100 chart, spending three weeks at #2 in 1969; it also topped the country music and adult contemporary charts that same year.


A trio, comprising brothers, Dean and Marc Mathis with Larry Henley. They got their falsetto sound (of lead Larry Henley) from Dean Mathis pitching to Boudleaux Bryant a Four Seasons style rendition the trio did of Boudleaux's composition 'Bye Bye Love'. Needing a fourth song for their first recording session, they picked up on a recent demo of this song, rearranged it in falsetto style, and was released as the B-side of their first 45 from 15 August 1964 - and that became their only million-seller. HUGE HIT in N.Z. US#2(2) from 19 September 1964, but charted from 15 August - hence my inclusion in Saturday's programme.

And the songs:
Before 1pm - Manfred Mann - Do Wah Diddy Diddy, (first jpeg) already on the Coast playlist as I was reminded when I got in there, so played that just before 1pm.
1pm Los Bravos - Black Is Black, in the Coast system but not played on regular basis as far as I'm aware
2pm The Crazy World Of Arthur Brown - Fire (second jpeg)
3pm Tommy Roe - Heather Honey
4pm Jerry Wallace - Primrose Lane (third jpeg) [originally a mono recording] the version I played was off the Collectables 6035 Primrose Lane, Very Best Of Jerry Wallce CD and was a remake, played slightly faster and was shorter in duration at 2:13 than the original at 2:25.
5pm The Newbeats - Bread And Butter
Posted by Unforgettable Music at 2:26 AM No comments:

This group received 5 gold disc awards in 3 months; including this track, a US#1(1) 7 August 1965, and (eventual) 5th million-seller for the group with a song that had been made famous in 1911 by the cockney comedian, Harry Champion. Monster Hit in N.Z.

The biggest Merseybeat group not managed by Brian Epstein. Formed in 1962 the group were signed to Pye in 1963 and put under the care of staff producer Tony Hatch and this was the first of six such production successes for him. A cover of a Drifters hit it became #1 the day of the Great Train Robbery - UK#1(2) from 8 August 1963 and a Monster Hit in NZ. 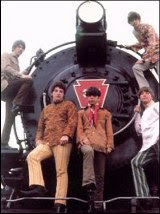 And the songs;
1pm, The Troggs – With A Girl Like You
2pm, Beatles – Help
3pm, Herman's Hermits – I'm Henry VIII, I Am
4pm, Roy Orbison – Candy Man
5pm, Ohio Express – Yummy Yummy Yummy
The article in Wikipedia says; "Though marketed as a band, it would be more accurate to say that the name "The Ohio Express" served as a brand name used by Jerry Kasenetz and Jeffrey Katz's Super K Productions to release the music of a number of different musicians and acts. The best known songs of The Ohio Express (including their best scoring single, "Yummy Yummy Yummy") were actually the work of an assemblage of studio musicians working out of New York, including singer/songwriter Joey Levine."

and the biggest Merseybeat group not managed by Brian Epstein - I did play The Searchers - Sweets For My Sweet. A regular on the Coast playlist.
Posted by Unforgettable Music at 2:39 AM No comments: